Scots say "No" to independence but "Yes" to freistilbox

Long before the actual vote took place on September 16 2014, The Scottish Independece Referendum drew a lot of attention in all over Europe. So, when Paul Linney from madewithcustard got in touch with us a few weeks before the event, we were thrilled about the opportunity to host scotlandreferendum.info. Together with web agency Post Creative, Paul was in the process of building the website for the City of Edinburgh and scouting for a WordPress hosting solution that would be able to sustain stable operation even during the visitor peaks expected for voting night. 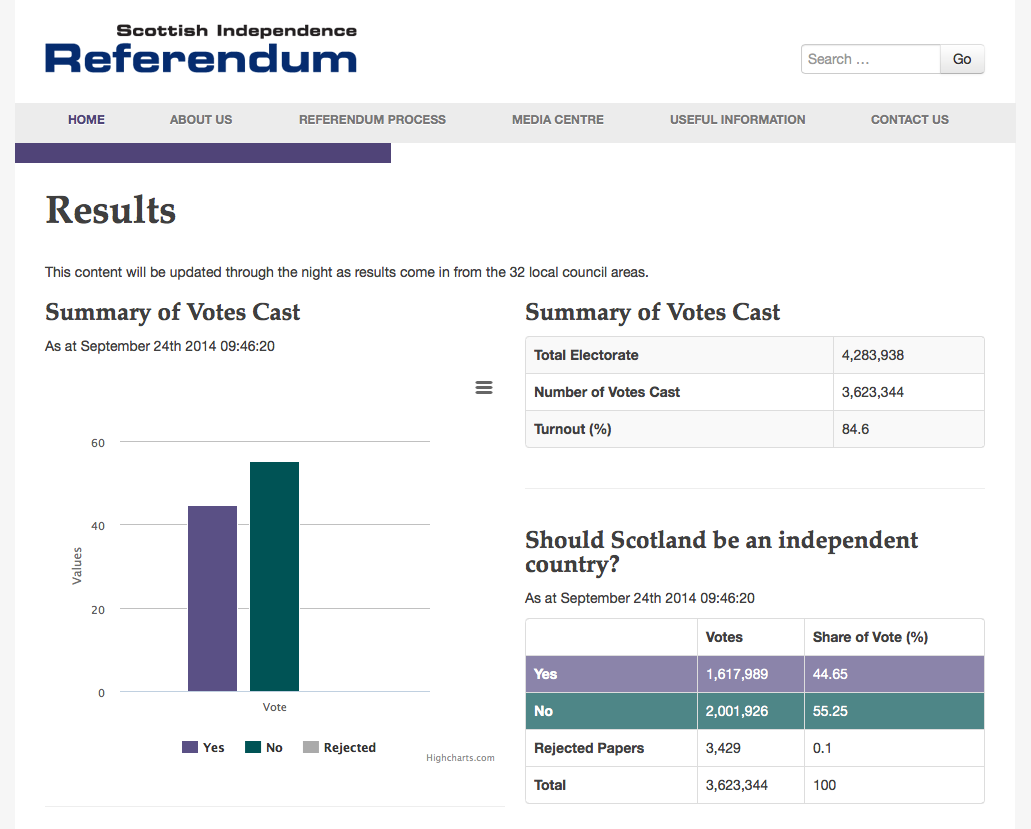 Before we go into how freistilbox handled the traffic on voting day, a question: How can it deliver this kind of performance? One aspect is that we run our hosting platform on bare-metal infrastructure. Using dedicated hardware gives us full control over its resources. In comparison, public cloud infrastructure is designed as a black box for its users who can’t prevent noisy neighbours from eating up CPU capacity, disk I/O performance or network bandwidth. Another important aspect is network latency. Sometimes, website performance suffers simply because cloud machines are talking to each other over long network distances. For freistilbox, all important communication happens within a dedicated data center rack. In our experience, this setup is perfect for fast and reliable content delivery.

When referendum day came, our ops team started monitoring the site’s performance more closely. We were prepared to add additional boxes as soon as demand would require it. When the vote counting results started to come in after 10pm, visitor numbers climbed significantly, as expected. freistilbox handled all traffic peaks gracefully and we didn’t have to intervene at any time.

While the Referendum’s results surely were disappointing for many Scots, our customers were delighted by how freistilbox had performed. Shortly after the event, we got the following email from Post Creative’s Nova Stevenson:

I’ve been really impressed with the speed of the Scottish Referendum website on your platform so I’ll be coming back to you to discuss moving our sites over to you in the next few weeks.

We can’t be happier about this outcome. freistilbox proved once again to be a world-class hosting platform for Drupal and WordPress. This is our vision and every day (and on many nights, too), we put in all the necessary work to make it reality.